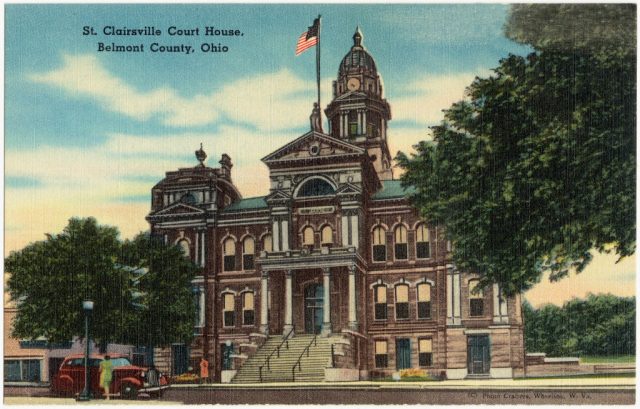 The community was founded in 1796 and was originally named Newellstown in honor of its founder, David Newell. According to reports, Newell in 1802 renamed the town in honor of his cousin General Arthur St. Clair, who was the first governor of the Northwest Territory, a confidant of George Washington, and President of the First Continental Congress. Founded in 1802 as St. Clairsville, it had 400 residents at the time of its incorporation in 1807. The town was incorporated a second time in 1818. In 1977, the village attained its current status as a city.

The moniker “Paradise on the Hilltop” originated in the early 1920’s and warranted a logo for the town’s first substantial subdivision. It was on the eastern side of the community and is now known as “East Lawn.”

St. Clairsville has been the county seat of Belmont County since 1804.

Benjamin Lundy settled here in 1815 and started the first abolitionist society known as the Union Humane Society and the first newspaper publication dedicated to the elimination of slavery. Lundy left St. Clairsville in 1819. His home still stands on Main Street and bears a historical marker in his honor.

Wilson Shannon was a resident of St. Clairsville who was elected Governor in 1838, the first native Ohioan to serve in that position. He also served as the U.S. Minister to Mexico and Governor of the Kansas Territory. His home still stands at 229 West Main Street.

The City has suffered through major disasters, including a fire in 1866 and a tornado in 1887 which destroyed much of the downtown. In 1994, the St. Clairsville Historic District was listed on the U.S. Department of the Interior, National Park Service’s National Register of Historic Places.

The National Road Bikeway was completed in 1998 and has become a regional attraction.

In 2007, the community was the 5,001-10,000 population category winner of a national competition known as “America in Bloom.” In 2014-2015, St. Clairsville was named by Ohio Magazine as one of Ohio’s “Best Hometowns.” The City won the 2016 St. Clairsville Area Chamber of Commerce’s Community Improvement Award. The City also has been awarded the National Arbor Day Foundation’s Tree City USA designation annually since 2000.