Thanks to the Building Preservation/Restoration (BPR) program of Belmont College, St. Clairsville’s train depot is coming back to life

Thanks to the dedicated faculty and students of Belmont’s Building Preservation/Restoration (BPR) 2-year degree program, the City’s train depot has benefitted from several exterior and structural improvements. The BPR program has used this mid- to late- 1800s structure for “hands-on” training in several disciplines over the past two summers for four different field lab courses and groups of students. Because this historic structure is owned by the City, it is a candidate for this donation of skilled labor by Belmont College. The City extends its gratitude to Belmont College for choosing this structure for the BPR program’s community focus.

An earlier Windows and Doors course restored in the college’s lab the original wood window frames which remained in the train depot. After reinstalling the windows and lintels above many openings, the students removed material from the interior of the train depot to expose several structural challenges to its timber frame design. They subsequently stabilized a timber column and a section of timber sill. Students have been repairing and replacing sections of the board and batten siding which dates to the period when the train depot was constructed. 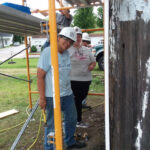 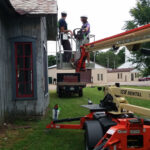 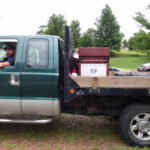 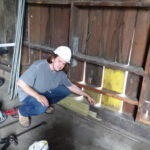 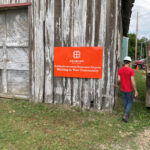 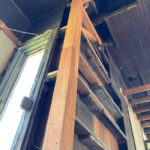 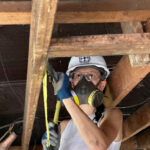 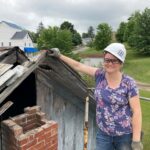 The students have been led by BPR Adjunct Instructor Derrick Smith, a 2004 BPR graduate who has worked on a half dozen or more similar railroad structures in Ohio and West Virginia. Last week, students made progress on temporary repairs of the original slate roof which has outlived its useful life. The City is grateful to ICR Equipment Rental, a local business, which donated a lift for a day which aided in the roof stabilization. The City seeks to replace the slate roof with a new slate roof, maintaining the depot’s eligibility for listing on the National Register of Historic Places and its value as a cultural resource.

In 2017, a BPR student who was an engineer by training chose to analyze the train depot for a Historic Structure Report, a requirement of the BPR Building Pathology course. This information has been useful to the City in efforts to secure funding to finish the restoration of this historic asset located two blocks south of the National Register Historic District in the City’s downtown.

The City is in the process of securing state funding for the train depot, following the efforts of State Senator Frank Hoagland and State Representative Don Jones to secure an earmark for the City in the capital spending bill which Governor DeWine recently signed into law. This earmark is the first step in applying to the Ohio Facilities Construction Commission for grant funding to restore historic and cultural resources. The City has begun this process under the leadership of Eric Gay, Director of the Parks & Recreation Department.

Since its creation in 1989, Belmont College’s Building Preservation/Restoration program graduates have added immeasurably to the field of historic preservation. While the local area has provided the bulk of its students, this degree program has been a magnet for students from around the tri-state region and the country due to its specialized training. The BPR curriculum includes the history and theory of Historic Preservation, as well as “hands-on” lab instruction in carpentry, woodworking, masonry and ceramic tile, roofing, blacksmithing, stained glass and other decorative arts. Out-of-state students more often are non-traditional students pursuing a career change or simply a passion for history and old buildings. BPR graduates currently are employed by entities ranging from: the National Park Service to historic sites like Thomas Jefferson’s Monticello and the Lee family estate, Stratford Hall, in Virginia; leading preservation firms with regional or national reputations; or state (and local) governments with responsibility for key decisions on preservation resources in their jurisdictions. Many graduates have worked for historic restoration businesses in the Ohio Valley and beyond or decided to start businesses of their own, while others have pursued a bachelor’s or master’s degree in historic preservation (or related fields like architecture) in order to teach in the field or as the foundation for management roles in the industries noted above. For additional information on the BPR program, visit the Belmont College website (https://www.belmontcollege.edu/current-students/programs-of-study/building-preservationrestoration/) or call 740-699-3939, to speak with the Faculty Lead Dave Mertz.

A little bit of history…at the December 15, 2008, City Council meeting, then Mayor Bob Vincenzo explained to Council that the Central Park Master Plan which was under discussion would be a 15-year project. To achieve all of its goals, public funds and donations would be needed. In the intervening years, a community garden, an amphitheater, volleyball court and outdoor public restroom have been built according to the Master Plan. The City has made gradual progress on the park’s development despite lack of funding being a persistent challenge. The train depot is an important historic building which was included in the Central Park Master Plan. The train depot and railroad are documented as bringing commerce and passenger traffic to the seat of government in Belmont County as early as 1887.

If additional funds can be secured to reconnect the train depot to nearby City utilities, add an ADA-compliant bathroom, mini split HVAC unit, and a small kitchenette, this structure would provide the Parks & Recreation Department and nearby schools with an additional option for general meeting space. It also would be useful for educational programming related to the adjacent community garden, and it would be a unique public and private rental option. Finally, a restored train depot would enhance programming options once the National Road Bikeway is fully developed to the east through and beyond Central Park as envisioned in the Central Park Master Plan.